About this Libguide: Trans & Two-Spirit

This year marks the 50th year anniversary of LGBTTQIA activism and protest movements stemming from 1969's Stonewall Riots: a foundational Queer and Trans People of Color led uprising-resistance against LGBTQIA-discriminatory laws and police raids of queer-trans community. Led by queer and trans women such as Sylvia Rivera, Marsha P Johnson, Miss Major, and Stormé DeLarverie, these community protests are now referred to as "the Stonewall Riots" or "Stonewall Uprising" which largely ignited the beginning of nation-wide activism and community organizing within the Gay Rights Movement and Gender Justice Movements that are still ongoing today. 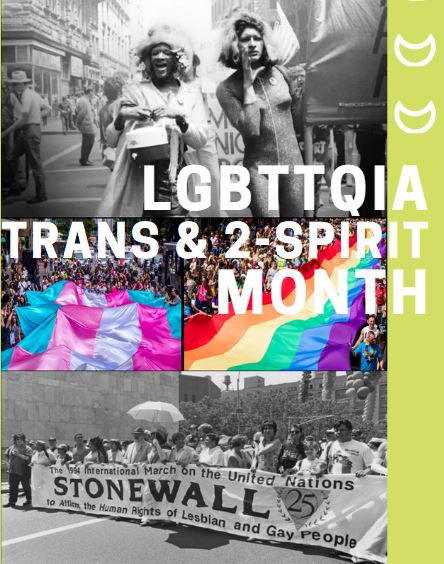 This October Highline College's library honors the  TRANS  and   INDIGENOUS TWO-SPIRIT  communities within and crucial to LGBTTQIA histories, culture, leadership, and ongoing activism movements. This guide will highlight the voices of Indigenous Two-Spirit and trans scholars, writers, artists, leaders and activists. Highline College's library welcomes our students, staff, faculty, and friends to learn more about Trans and Indigenous Two-Spirit identities.

"Two-Spirit" was coined in the 1990's at an LGBTQ Native People's conference from a translation of an Ojibwe phrase. Two-Spirit offers an English language approximation of Indigenous individuals' experiences embodying more than one-gender, across femininity and masculinity expressions, ceremonial roles, and spiritual identity. Two-Spirit lineage and culture has existed from before colonization across Indigenous tribal nations around the world. Two-Spirit as a phrase was meant to be a home for queer and trans Native/Indigenous people in the English language, in a time when that is the language most of us know best. Two-Spirit* Indigenous identities are also included (LGBTT*QIA) in wider Queer and Transgender political movements as well.

As part of the transition process, many trans people are prescribed hormones by their doctors to change their bodies. Some undergo surgeries (and name-changes to align with their gender identity) as well. But not all transgender people can or will take those steps, and it's important to know that being transgender is not dependent upon medical procedures. However a person identifies themselves (across femininity/masculinity and gender pronouns she/he/they etc is how they should be treated, named, and honored.)

>> People in the trans community may describe themselves using one (or more) of a wide variety of terms, including (but not limited to) trans, transgender, transsexual, gender nonconforming (GNC), and non-binary (NB). Always use the name and gender pronouns used by the person based on how that person identifies; she/her, he/him, they/them, ze/hir etc.

This libguide also raises awareness around the 50th anniversary of the New York City Stonewall Riots; protests against police-raids that were headed by Trans women of color, drag queens, gay people, and disenfranchised LGBTQIA youth. Marsha P. Johnson, Sylvia Rivera, Miss Major, and Stormé DeLarverie largely led the resistance/protests at the Stonewall Riots which initiated unprecedented community organizing for the gay-rights movements; ushering in the beginning of more global gay, gender-justice, and queer-trans rights activism movements. We honor the beginning of these movements during LGBTTQIA History month in October and  celebrate LGBTTQIA  P R I D E  around the world in June.

Magazines in the Library

"KIKI" has been called the unofficial sequel to the iconic "Paris is Burning documentary" following Queer and Trans Ballroom competitions central to fashion-dancing house subcultures. Over 20 years later, "KIKI" brings viewers into the lives of more Queer and Trans teens, particularly People of Color navigating more nuanced understandings of what it means to create and advocate for queer community today.

New Library Books in Support of Trans and Two-Spirit Communities

Books in the Library about LGBTQIA History